Inflation and the Federal Reserve

Signs of moderating inflation continue and will allow the Federal Reserve to reduce the pace of rate increases, which bodes well for stocks and bonds…

Inflation continues to ease, which will allow the Federal Reserve to reduce the pace of rate hikes, letting markets rise again…

The markets have been down since the beginning of the year due to the Federal Reserve’s decision to tighten monetary policy to tame unusually high inflation.  The markets believe that the Federal Reserve will need to cause a painful recession in order to bring inflation under control as was the case in the mid 1970s to early 1980s when stagflation decimated the economy and the markets.  A lot of this pessimism has already been priced into the valuations in the markets.  As improvements in inflation continue, this will allow the Federal Reserve to reduce the pace of rate increases and let markets rise again.

Jerome Powell’s recent tough talk at the 2022 Jackson Hole gathering of global central bankers on “pain” for businesses and households as a result of the need for tight monetary policy to fight inflation is more to re-establish his shattered creditability as an inflation fighter. This is because in his 2021 Jackson Hole speech, he shrugged off inflationary risk in order to have stronger employment.

"If a central bank tightens policy in response to factors that turn out to be temporary ... the ill-timed policy move unnecessarily slows hiring and other economic activity and pushes inflation lower than desired. Today, with substantial slack remaining in the labor market and the pandemic continuing, such a mistake could be particularly harmful."

Powell’s 2021 speech garnered him the moniker on Wall Street as the most dovish Federal Reserve chairman in history and shattered his credibility as an inflation fighter.  By channeling Paul Volcker (who defeated inflation), Powell hopes the markets will do some of the tightening for him and so he will have to do less.

We are not out of the woods, but progress is being made and we are on the right path…

The below chart provides the path to tame inflation without causing a recession:

2. which will temper the strong jobs market

3. which will reduce inflationary pressures 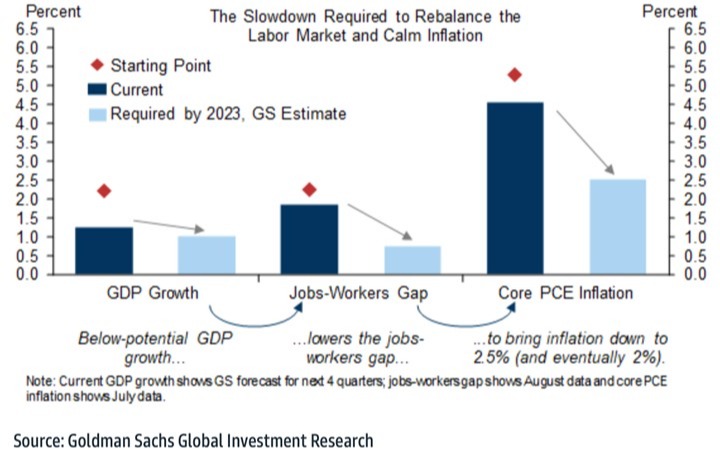 Recent monthly inflation data shows progress being made as the slowing economy is beginning to reduce demand and soften prices: 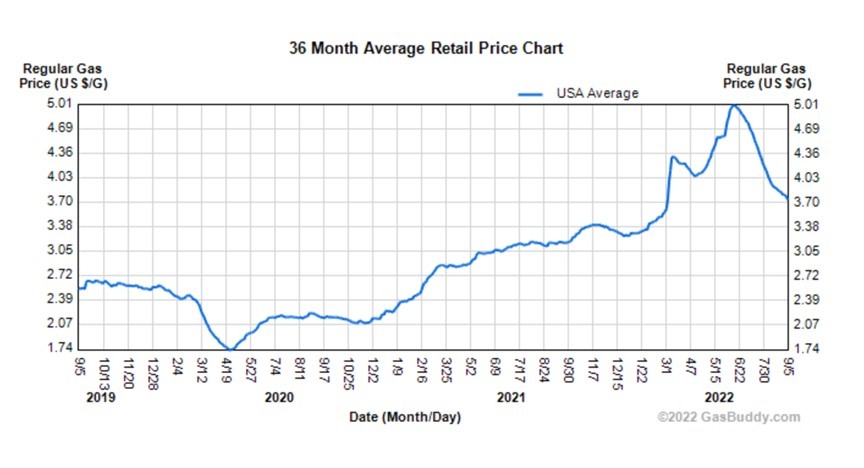 Here is the demand for workers:

Housing/shelter is the only area that is likely to rise, but at a more moderate pace, as prospective home buyers are priced out of the housing market and are pushed into the rental market.   Housing costs will come down in 2023 as the economy and job market soften, but plateau instead of declining like the other components of inflation as the US economy is structurally short over 4 million units of housing (home builders and banks were averse to creating supply after the Great Financial Crisis caused by housing).

One silver lining is that rent is about one third of housing inflation, while two thirds is this mysterious “owner’s equivalent rent” or OER.  As a homeowner, I don’t pay rent but the government wants to measure my housing inflation as if I am renting to myself.  This OER has no economic impact on homeowners. 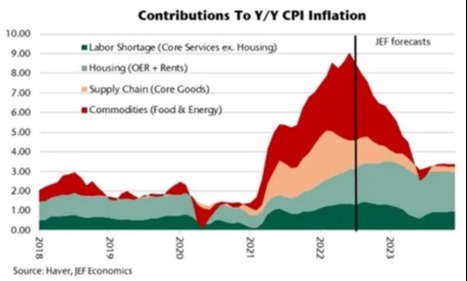 Patience investors will be rewarded as the scenario outlined above unfolds…

As the decelerating inflation data unfolds, I expect Powell and the Federal Reserve to ease off on the pace and magnitude of the rates hikes.  The markets will rally on this shift and it won’t need a rate cut to support it.  The recent strong employment numbers show that the economy is strong enough to sustain growth in spite of the recent rate hikes implemented.  In addition, the continued growth of the economy and corporate profits will also prove to investors that the economy doesn’t need rate cuts/ultra-low rates to grow.  These events will take stagflation off the table and lead to the next bull market.

Please contact us if you have any questions or concerns.