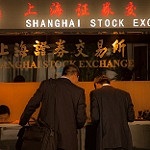 While the Shanghai Disney Resort is not expected to open until the Spring of 2016, locals need not wait as they can take a roller coaster ride on the Shanghai Stock Exchange (SSE). From June of 2014 to June of 2015, the SSE rose about 150%, where it peaked and then dropped about 33% from mid-June to July. Volatility was extreme as the SSE dropped 8.5% in a single trading day. Prior to the drop, making money never seemed easier, locals opened trading accounts (with margin of course) at a ferocious pace. For years, new accounts averaged about 100,000 weekly, now grew to 1.1 million a week before the market peaked. Retail investors make up a staggering 85% of the trading volume, while institutional investors make up 90% of the trading volume in the US.

As the SSE roared upward, Chinese farmers turned speculators did not tend their fields until after the stock market closed. Who are these "after hours farmers"? According to Professor Li Gan of Southwestern University of Finance and Economics: 1) more than 66% left the education system at age 15 or younger; 2) more than 30% left the education system at age 12 or younger; and 3) have household wealth that is less than half of previous investors before the SSE started to take off. With over 300 million farmers in China, a lot of them opened margin trading accounts, unfortunately as the SSE peaked. Joseph P. Kennedy, Sr. said he cashed out of the stock market before the 1929 crash when his started hearing stock tips from his shoeshine boy. I guess a lot of educated Chinese investors began cashing out of the SSE as they became aware of farmers giving out stock tips.

Will the crashing Chinese stock market drag down the Chinese and US economy? This is not likely as the problem is confined to those investors that came late to the party. As of today, the SSE is still up about 20% year-to-date and 75% over the last 12 months, so long term investors are still way above water. In addition, fewer than 10% of Chinese households invest into the stock market. For those households that do invest into the market, stocks comprise less than 15% of their exposure; real estate and cash are their preferred investments.

As I been telling clients, all the international turmoil occurring outside the US, should not shake our confidence in investing in the very best US corporations. Ask yourself, if you were a multi-millionaire in Syria, Ukraine, Greece, Venezuela and China: Would you keep your money there or in the US? Would you invest into the local markets or invest in the US markets?