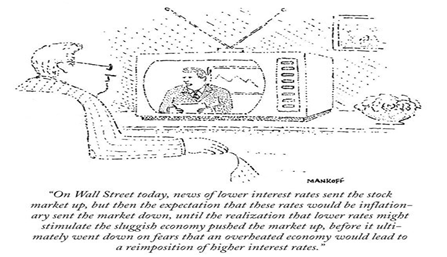 Goldilocks and the Three Scares

Goldilocks is good for the stock market

After the Great Recession everyone has become more conservative, leading to an extended below average economic recovery (no boom/no bust) but plenty of growth scares

A recession (like our Great Recession) that is caused by lax credit standards and irresponsible borrowing, led to a boom in housing and a bust in housing, followed by a below average recovery as lenders are afraid to lend and borrowers are afraid to borrow.  This excessively conservative psyche can last an entire generation, as we can see with the Depression babies.  Due to this subpar recovery and fragile mindset, there are lots of growth scares (real or perceived), which will lead to temporary corrections in the stock market.  While growth scares are plentiful and investors will over-react, no recession actually occurs and the stock market recovers.  Here are some of the growth scares that came and went:

These previous growth scares initially will shake the markets like an earthquake, but eventually subside and fade away.  Each growth scare has their unique profile.  The Ebola scare was a quick jolt and a fast fade. We are currently revisiting the Ebola market low of October 2014 and very few people can remember what made the market drop back then.  Some growth scares are also like horror movie sequels, which is how I would describe the Greece debt crisis series, where the first one is really scary, but as subsequent sequels are released, you know all the “smoke and mirror” tricks being used to scare you.

Goldilocks and the three scares…

It is likely the Goldilocks economy will continue to meander forward as we currently have no boom to cause a bust.  As long as the markets are made up of humans and memories of the Great Recession are fresh, this will lead to more growth scares and temporary corrections in the stock market.

Here are the latest three scares for Goldilocks and my thoughts:

1) The China scare goes like this: an economic slowdown in China, the second largest economy in the world, will drag the rest of the world into a recession.

This is unlikely as China is not a consumer economy that imports much from the rest of the world; instead, China is a manufacturing based economy, exporting to the rest of the world.   US corporations use China as a factory to make their products (iPhones, clothing and furniture) to sell to mainly their US consumers.  For the US, consumers are 70% of the economy.  For China, manufacturing is 70% of their economy.  US corporations are the clients for China, not the other way around.  The US sells very little to China and hires them to manufacture lots from them.  Take a look at the data that shows this:

US consumers are 70% of our economy while China is less than 1%.  The US consumer is the key to not only the US; it is also the engine of growth for the global economy.

2) Oil price drop scare is based on the belief that the world is entering a global recession.  This argument would have validity if global demand dropped significantly, but this is not the case when you look at the chart below from the International Energy Agency.  Instead it shows that demand has steadily grown since the 2008 Great Recession.  Over supply has been the main factor for lower oil prices, but the amount of over supply (bars in the chart) is not significant relative to the level of demand.  It looks like the oil markets will begin to gradually work towards balancing in the second half of 2016 as supply growth slows while demand continues to accelerate.

3) US Federal Reserve Interest Rate Hike Forecast scare is causing investors to worry that the US Central Bank’s rate policy is set in stone and is not flexible enough to adjust to changing market conditions.   The markets are worried that central bankers are “white ivory tower” academics that are clueless to what is happening in the real world.  For instance, the European Central Bank (ECB) under Jean-Claude Trichet raised interest rate in July 2008 as the world was headed into the Great Recession.  The ECB and Trichet also raised rates in April and July of 2011 right before Greece debt crisis erupted (the G in the PIIGs) that summer of 2011.

Currently, the US Federal Reserve (Fed), shows in a chart, called the Dot Plot, what Fed officials think interest rates will be for this year, next year and longer term.  The Fed wants to give the market clarity but is creating anxiety instead.  This is particularly so when economic data and market prices in a subpar economic recovery are not smooth or linear, making markets worry that Fed policy is wrong.  The good news is that the Fed has constantly shown that they are flexible and willing to adjust their policies to the changes in the economy and markets.  More importantly, they will also need to make communication adjustments so that they are not boxed in by their Dot Plot forecasts.  They need to learn from Alan Greenspan, the former longtime head of the Fed.  Below is Greenspan’s quote, which indicates that he clearly understood this nuance.

“I guess I should warn you, if I turn out to be particularly clear, you’ve probably misunderstood what I said.”

The current threes scares will fade just as the other scares did. Look for the capital markets to decouple from China, Oil and the Fed as they have done with Greece and the previous scares.