I'll gladly pay you Tuesday for a hamburger today

““I’ll gladly pay you Tuesday for a hamburger today”.”

E. C. Segar, the Great Depression Era cartoonist, who created Popeye, also gave us Wimpy.  I am sure many bank lending officers during those days would not lend money to Wimpy as they knew he would not pay them back on Tuesday.  The majority of bank lenders in those days, most likely viewed the majority of loan applicants as not likely to pay them back either.  In addition, those who had money and didn’t need loans, would not invest due to a lack of confidence.  Along with bad fiscal and monetary policies, this led to an extended period of miserable economic growth.

Fast forward to the current day Great Recession and history is repeating itself.  One major difference is that of monetary policy, which has been very accommodating with Zero Interest Rate Policies (ZIRP) and Quantitative Easing (QE).  Despite massive amounts of liquidity (money) that the US Federal Reserve has put into the coffers of banks (buying securities from them), much has not gone into making loans due to the Wimpy Syndrome (we won’t get paid on Tuesday).

So the banks around the world have been depositing back to their respective Central Banks, almost all the QE money.  In the US, the banks here would rather earn 0.25%, rather than make loans (auto loans have been the rare exception).  To combat the Wimpy Syndrome, Mario Draghi (President of the European Central Bank) recently announced a Negative Interest Rate Policy (NIRP), in which banks will be charged 0.10% for keeping their deposits at the ECB.  NIRP is another attempt to motivate the banks to lend.  Will it work?  Whether it works on not is not the point as these creative monetary policies have stabilized the financial crises. How can we tell? Draghi can’t easily do a QE as the EuroZone is not a monolithic sovereign entity, like the US is (which government debt would you buy as the European’s all have their own).  However, his announcement of intentions for a QE has stabilized the Euro crisis.

Time may be our biggest ally as risk-averse bankers have become less wary of the Wimpy Syndrome. They have gone back to making auto loans and from the recent 2nd quarter earnings reports, loan growth has begun to accelerate as can be seen from the table below.

If the animal spirits are coming back after a long time on the sidelines, this may mark the turning point for this very stagnant recovery. 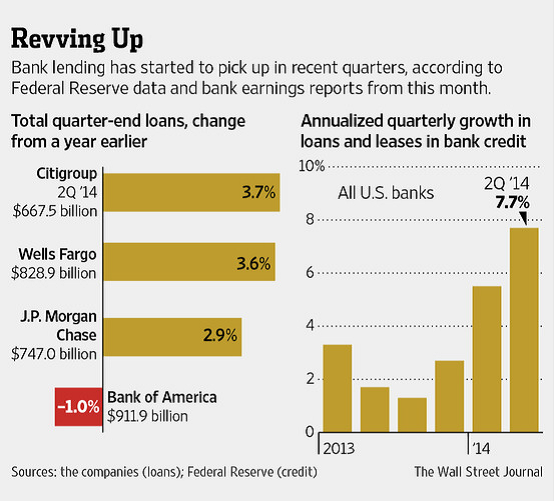