Investing Trumps Who is Elected 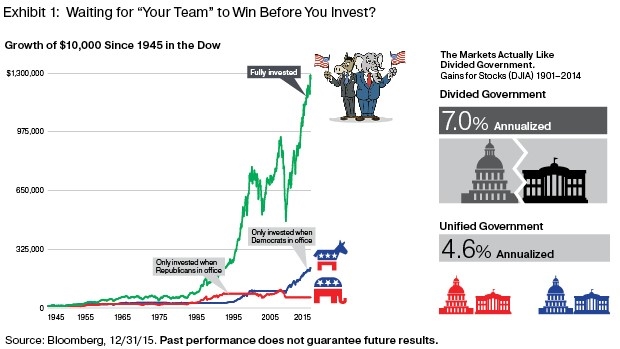 INVESTING TRUMPS WHO IS ELECTED

In recent meetings, I can’t recall anyone asking me about China and oil as these scares are fading away like concerns about Greece and the collapse of the Euro did. The focus now is Donald versus Hillary and how dangerous it is to invest during a Presidential election year.

Will a Republican or a Democrat in the Oval Office be better for the stock market? It doesn’t seem to matter as the line chart in Exhibit 1 shows. Since 1945, staying invested (green line) no matter if the President is Republican or Democrat has produced better returns than only investing if the President is a Republican (red line) or only investing if the President is a Democrat (blue line). That is because the US economy and equity markets are not dependent on the government to grow and thrive, since we, the people (consumers), are about 70% of the economy while the government is only 17%. This is in stark contrast to France where their government is 57% of the economy; so it is much more critical whether the next President in France is a Democrat, Socialist or a Communist.

Our government is designed to have checks and balances in order to prevent a concentration of power. This division of power has served us well as no country comes close when measured by a combination of GDP and per capita income. While China has the second largest economy after the US, China’s per capita income is less than that of Greece!

Our three branches of government (Executive, Legislative and Judicial) with these checks and balances have been good for our stock market as well, particularly when the Executive and Legislative branches are divided and not controlled by either the Democrats or Republicans. Exhibit 1 show that from 1901 to 2014, the DOW has an annualized gain of 7.0% when government is divided versus only a 4.6% annualized gain when government is unified under one political party.

This is telling us that absent a “perfect” President and Congress of the same political party, corporate profits and stock valuations benefit from a divided government, which does not allow political agendas to be enacted that disrupt the growth of the economy. So if we do have a President and a Congress from the same political party that is not enacting policies in the best interest of the Nation, our critical midterm elections, can and will, shift the control of Congress. Midterms elections in the US usually see the the President’s political party lose seats in the Congress, leading to a divided government. In fact, every President since 1910 have seen their political party lose net seats in the Congress during their duration in the Oval Office.

There will always be something out there that will make you fearful and unwilling to invest. Our fear based media will make sure of that, even if they have to make up one. These fears are misguided and fade away as I highlighted in my last piece “Goldilocks and the Three Scares”.

Prosper (invest) if you are going to live long!