The US economy and corporate profits can withstand geopolitical tensions, inflation and rising interest rates, but it will be volatile in the short term…

As the Russia-Ukraine War is unfolding before our eyes, the vast majority of the world is uniting to support Ukraine.  Everyone prays that the war will end sooner, rather than later, so as to minimize the loss of lives and to see families united again.

“But in the end it’s only a passing thing, this shadow; even darkness must pass.” — Sam Gamgee

Investors do worry about wars, but past conflicts have not stopped the US economy and corporate profits from growing, resulting in positive returns for stocks (see table below).

On a short term basis, volatility is high though. Initially, the stock market drops during the pre-war period when hostilities build up and investors begin to discount war into prices.  As the fighting starts, the market drops sharply initially, but then reverses upward as the uncertainty is over…war has begun.  The next phase, the sustained fighting, allows corporations to make adjustments so that their business operations are not interrupted.  The Russia-Ukraine War does put additional stress on the supply chain already strained by the pandemic, but the US has no significant economic dependency to both economies. 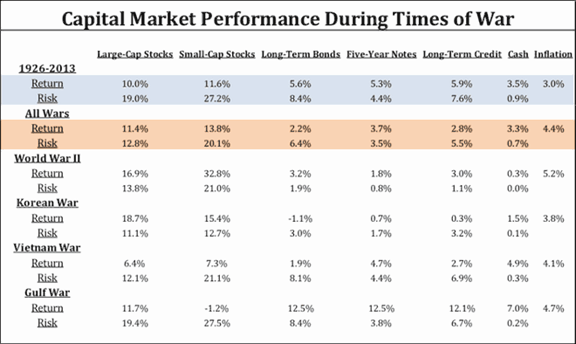 As the pandemic evolves into an endemic due to vaccines and medications, both the supply and demand for goods/products will begin to balance, allowing inflation to peak and begin to normalize.

The service sector will see some inflationary pressures but nothing like the magnitude as seen on goods side.  Why?  Consuming services like a vacation in Key West, Florida is not as complicated as getting an imported car from Germany, which requires thousands of parts from around the world to assemble and have it transported by boat across the ocean to you.

Yes labor costs will rise for service providers, but they can substitute technology to increase productivity.  The labor force can also expand to mitigate inflationary pressures.  The chart below shows that after the introduction of vaccines in late 2020 and early 2021, sidelined workers re-entered the labor force as their health concerns about the virus eased.

CNBC reported, with the release of the February employment numbers:

2. signs that inflation is cooling

The latest data show the labor force grew by 304,000 workers, a potential sign the effects of the pandemic—such as people not being able to work because they were sick or businesses scaling back hours due to the virus—are fading.

Job growth accelerated in February, posting its biggest monthly gain since July as the employment picture got closer to its pre-pandemic self.

Nonfarm payrolls for the month grew by 678,000 and the unemployment rate was 3.8%, the Labor Department’s Bureau of Labor Statistics reported Friday. That compared to estimates of 440,000 for payrolls and 3.9% for the jobless rate.

In a sign that inflation could be cooling, wages barely rose for the month, up just 1 cent an hour or 0.03%, compared to estimates for a 0.5% gain. The year-over-year increase was 5.13%, well below the 5.8% Dow Jones estimate as more lower-wage workers were hired and 12-month comparisons helped mute more recent gains.

With inflation data peaking, this will take the pressure off of the Federal Reserve to raise interest rates too quickly to cool inflation and run the risk of causing a recession…

If we get more data points like positive February employment numbers of growth with moderating inflation, the risk of the Federal Reserve causing a recession by raising rates too quickly and to too high of a level is greatly reduced.  This would more than offset the short term inflationary pressures from higher energy and wheat caused by the Russia-Ukraine war.

Volatility will remain high as the Russia-Ukraine war continues.  I suggest you reach out to your portfolio manager or relationship manager to discuss your concerns.