“If you don't know where you are going, you might wind up someplace else”

The Fed raised rates in December 2018 with more tightening promised to come despite the Fed admitting that they had reduced their economic growth forecast, while inflation was also under their projected target, hurt their credibility with the markets. This blunder was not as bad as the European Central Bank (ECB) which raised rates in July of 2008 as the Global Great Recession was about to hit. If that wasn’t enough, the ECB raised rates again in April 2011 right before Greece begins to implode financially.

Market reaction to the Fed’s promise of more tightening despite softer economic growth, mild inflation data, weak China growth due to tensions rising from US/China Trade Wars, a strong US dollar and weakening growth globally, led markets to believe that the Fed was doing a very good imitation of the ECB.
Just look at the chart below and you can see that the markets had lost confidence in the Fed!! 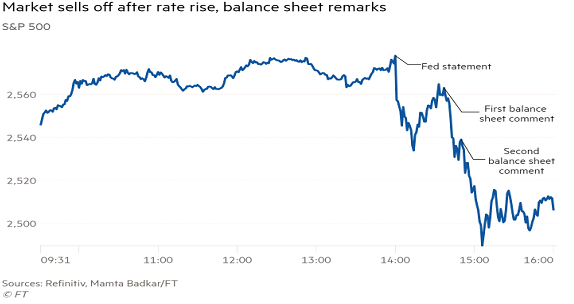 Make a U-turn if you are lost…

In early 2019, the Fed does a partial U-turn and proclaims no more rate increases for 2019 and states they will end their balance sheet reduction activities by September. The Fed has paused from their very hawkish stance of 2018! The markets seeing the Fed capitulate on their hawkish policies, sense something is wrong with global growth and they plow into sovereign bonds, driving rates lower. The yield on the 10-year US Treasury (USTN) which rose to above 3.2% in 2018 plummets to around 2.35%. The 10-year Germany Government Bond turns negative (people are paying the German government money for the privilege of lending them money). 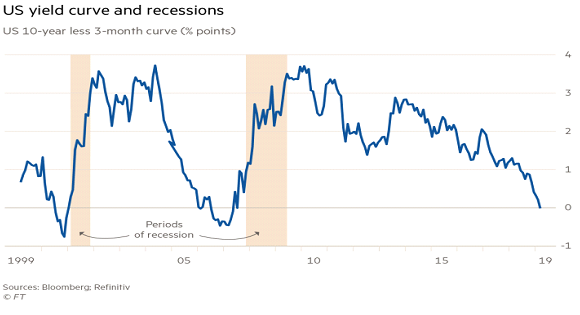 Not every inverted yield curve leads to a recession…

Should we worry about a recession occurring? Yes, but not a whole lot as not every inverted yield curve will lead to a recession as yield curves invert for many reasons.

The chances of a recession if we have rates, high inflation a very motivated Fed to drive interest rates higher to kill inflation; this is what Fed Chairman, Paul Volcker, did from 1979 to 1981.

These factors don’t exist today as interest rates are low and inflation is low. This Fed does not have an inflation problem to kill. Instead, this Fed is highly motivated to normalize interest rates after they were kept low to pull the US economy out of the Great Recession. Perversely, this Fed wants to raise interest rates so they can cut them if there is a recession in the future. The markets quickly straightened this Fed out! Not only is the Fed pausing their ill-advised tightening of monetary conditions, projecting that the Fed will actually cut interest rates by end of 2019 (see chart below).

I would say the odds of a recession are much lower now since the Fed is on the right path. The inverted yield curve will un-invert as fears about a recession subsides (long term rates rise) and/or the Fed cuts rates (shorter rates decline).

Fed will make a U-turn!