Prepare for your Someday-Social Security

Social Security:  “Prepare for your Someday”

Each day, thousands of Americans apply for first time Social Security benefits.   Unfortunately, due to the complexity of the “system” most applicants have not a clue understanding the numerous claiming strategies afforded them to collect benefits.  Unfortunately, not only are they putting their retirement planning at risk, in many cases their spouse’s future at risk as well.

Several months ago, the Wall Street Journal identified several issues retirees face when considering Social Security benefits.  Here’s a look as some problems involving both the agency and the benefits program that could shape anyone’s retirement, for better or worse.

The Social Security Administration is not your financial advisor

It is easy to blame someone at the Social Security office about the lack of guidance they provide on the best benefits strategies to choose.  The agency provides loads of information on its website and does it’s best to answer the public’s questions in its local offices (or by phone).  But a comprehensive discussion about the nuances of Social Security benefits and the best claiming strategies right for YOU are not going to happen.   So the onus is on you to learn about, or find help in deciphering, the basics: how benefits work, claiming strategies and possible pitfalls.

The agency, in short, is overextended.  According to the Wall Street Journal, in the past three years, the agency has lost 11,000 employees, or about 22% of its workforce; by 2022, about 60% of its supervisors will be eligible to retire.  Budget cuts have resulted in the consolidation of field offices, the closing of over 500 contact stations (mobile service facilities) and a delay in plans to open additional offices and one call center.   The demands on the agency mean that you might not be able to find, or find in a timely manner, the information or help you need.

One of the biggest slip-ups of a divorced spouse is understanding the rights of an ex-spouse retirement benefits.  If you are divorced, but were married for 10+ years AND divorced for 2+ years, you may be able to take a Divorced Spousal Benefit.  A spouse COULD claim both benefits beginning the divorced spousal benefit at Full Retirement Age (FRA) than suspend own benefit until age 70 (which would be 8%/year higher).  This strategy would NOT work if benefits are claimed before FRA.   If you remarry, you generally cannot collect benefits on a former spouse’s record UNLESS your marriage ends (either by divorce, death or annulment).  The bottom line:  ALWAYS inquire about your of full disclosure of family circumstances.   You may qualify for benefits that you would never have anticipated.

Social Security’s earnings test, in which benefits are reduced if a person is collecting benefits and income at the same time, generates numerous questions and even more confusion.  If you are under your FRA when you first receive Social Security benefits and if you have earned income, $1 in benefits will be deducted for each $2 you earn above an annual limit (2014 – limit is $15,480).  In the year one reaches FRA, the penalty shrinks, after you reach FRA, deductions end completely.

What most people don’t realize is money lost to the earnings test isn’t really lost.  Once FRA is reached, Social Security recalculates (and increases) future benefits to account for any dollars withheld.   Most beneficiaries feel they should work up to the limit, than stop.   Eventually, the lifetime, total benefits will come out the same. 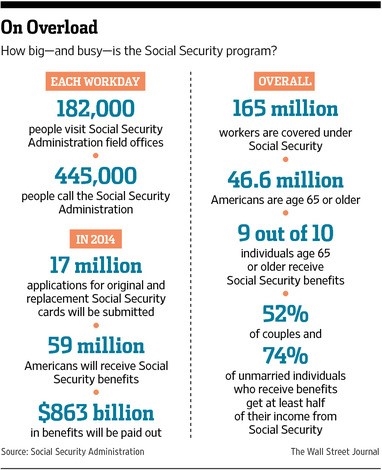 Spouses, at a minimum, should be aware of three (3) claiming strategies

Fortunately, couples have a tremendous amount of flexibility in how they claim benefits; unfortunately, the options can become so overwhelming, the least stressful option and easiest decision is take benefits as early as possible.

Before making a decision, three claiming strategies should NOT be ignored:  Maximize survivor benefits: if you claim benefits before FRA, you could be locking into a low survivor benefit when you die.   The longer you wait to claim, the larger the survivor benefit:  File and suspend: Once FRA is reached, you can claim than suspend your benefit.   This allows for two things:  Your spouse, if he or she is 62 or older, can begin collecting spousal benefits AND, second, your own benefit, when you eventually claim it, will have increased in size (DRC - Delayed Retirement Credit); File and restrict:  At FRA, one spouse can file and receive his/her own benefit and the other spouse can “restrict” the benefit to just the spousal amount.  At age 70, you can drop the spousal benefit and switch to own benefit which would be at least 32% larger thanks to the DRC’s.

NOTE:  As part of the Social Security Amendment of 1983, the rules governing the Delayed Retirement Credit were changed. The latest age at which DRCs apply was reduced to 70. And, for the first time, the size of your DRC is tied to your birth year. It ranges from 4.5% for those born in 1930 to 8% for anyone born in 1943 or later. This means that today’s retiring baby boomers can boost their benefit by 8% for every year past age 66 that they postpone filing.

Many retirees fail to consider (and ignore) the impact on how Social Security is taxed during retirement.  Often times, advisors (and accountants) suggest minimizing (or avoid) withdrawals from your next egg (i.e., 401k’s, IRA’s etc.) for as long as possible to take advantage of tax-deferred growth.  Many retirees who follow that advice file for benefits, typically at age 62 to help pay toward their retirement lifestyle.

No matter what age, it is paramount to have a RETIREMENT INCOME PLAN.   When considering when and how to take Social Security, choosing the easiest solution could hinder a long term retirement plan.   Feel free to attend a local Social Security office but good luck getting an accurate answer.  Best bet?  Call your most trusted advisor….CHATHAM WEALTH MANAGEMENT!!!