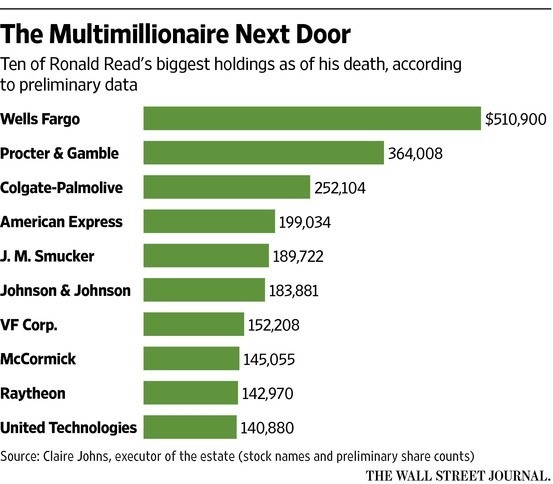 Stay on course and invest…

Ronald Read was born in Dummerston, Vermont on October 23, 1921 and died June 2, 2014. Despite, earning a modest living as a gasoline attendant and then as a janitor at JC Penney, Mr. Read amassed an $8 million fortune by investing into stocks and left $4.8 million to the local hospital and $1.2 million to the local library.

During his lifetime, he lived through many difficult periods for the US and the stock markets: the Great Depression, World War II, the Cold War, the Cuban Missile Crisis, the “Black Monday” stock market plunge in October 1987, the Gulf War in the early 1990’s, the bursting of the Dot-com bubble in 2000, September 11, 2001, the Financial Crisis of 2008, the Great Recession of 2008-2009 and the Flash Crash of 2010. In his 92 years of life, he saw 16 US presidents (some good and some not).

Through all the turbulence in the stock market during his lifetime, he stayed on course, investing into only stocks of companies he understood that paid dividends (he avoided technology stocks). He did not trade, as the vast majority of his investments were in the form of physical stocks certificates. After he died, they found about 5 inches of stock certificates in his safe deposit box. He had at least 95 stocks and below are his top 10 holdings.

For a man of modest means to create $8 million in wealth, this validates that stock ownership is one of the best ways to create wealth! However, all too often I hear that stocks are dangerous and something to be avoided, particularly as you get close to presidential election day. Ronald Read would beg to differ.