The Path to Recovery

The COVID-19 virus has battered the global markets as containment in China has failed and the infection rates have soared internationally.  By the end of January, infections had spread beyond Wuhan to countries throughout the Asia-Pacific region including Japan and Australia.  The first confirmed infection in North America was reported that month in Washington state, and the first case in the EU was reported in France.  At the end of February, the US got its first infection caused by community spread in Northern California.  Over 200 cases have been reported in the US and the worldwide number just passed 100,000 worldwide with infections growing rapidly in Iran, Italy and South Korea.[1]  This has led to extreme volatility both on the upside and down.  Unfortunately for investors, the movement has been mainly downside.

The painful correction of 10% (the fastest in history) has taken the S&P 500 back to the October 2019 levels, when investors sensed some sort of trade deal would be hammered out and brought the markets back.  Record highs were reached for the Dow Jones just over two weeks ago!  The 10% quick and violent correction is about losing the battle with containment and the accompanying uncertainty.  Containment did not work in China, and the world must now shift to control and cure.

What is the path to recovery?  I now expect it is no longer a V-shaped rebound, but a U-shaped recovery.  The only question is…will it be a narrow U of a number of months versus a wide U of a number of years?  I am in the former camp of a recovery in months as the world shifts to control of COVID-19, which I feel will be successful.

What is the mortality rate for COVID-19?  Is it more like the flu or Ebola?  As COVID-19 is new, the scientists do not know, and it is this uncertainty that is very unsettling.  This ambiguity has led to a pause in economic activity which is in turn reducing global growth.  This is very similar to what happened after the 9/11 attack.  We need to quantify the risk to everyone so that the recovery can start. 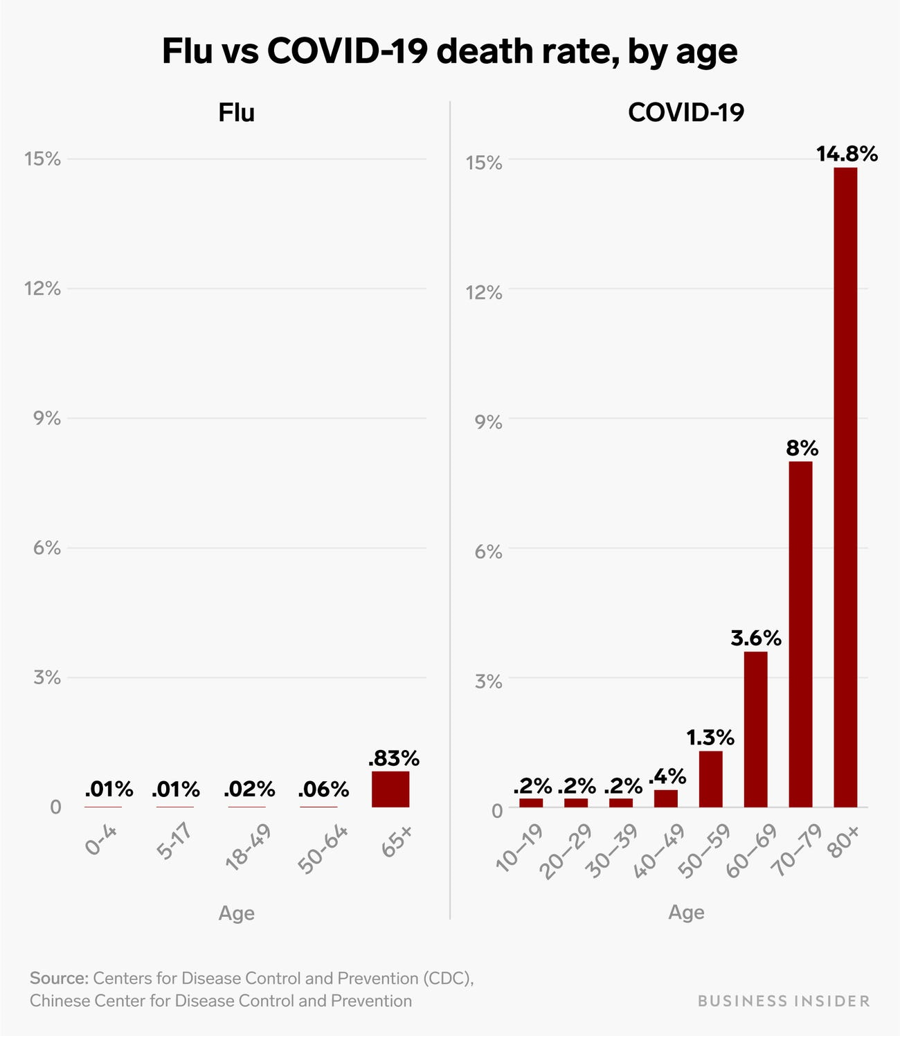 The chart above compares the mortality rate for the flu and current COVID-19 outbreak by age ranges.  Without a vaccine and an effective therapy, COVID-19 is much more deadly than the flu, especially for people 60 years and older.  For those younger than 60, the mortality rates are more similar.

Testing will be important as we want to identify those afflicted and treat them earlier in hopes of having them recover.  With mass testing, we will reduce the mortality rates by decreasing deaths (the numerator in calculating the mortality rate) and increasing the number of new cases (the denominator).  More important, this reducing in the mortality rate to closer to the flu, will relieve anxiety by reducing the uncertainty and allow for a recovery in the economy.

A vaccine is also important but will not arrive until next year.  When we get a COVID-19 vaccine, like an annual seasonal flu vaccine, infection and mortality rates should fall especially for older adults.  The vaccine should boost consumer and business confidence as actions can be taken to avoid widespread infection.

These are challenging times and we are here to answer your questions and address your concerns.  Do not hesitate to contact your relationship manager below to discuss your investments.