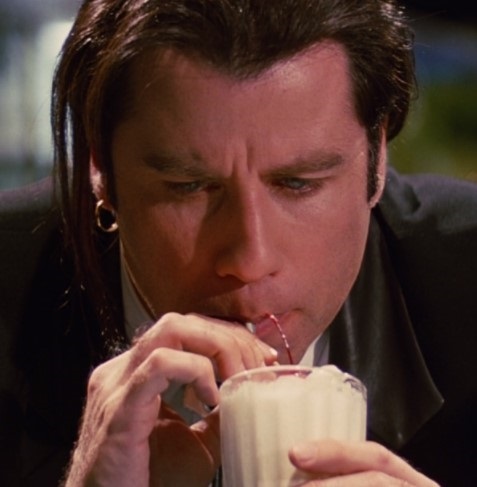 In the 1994 movie, Pulp Fiction, Mia Wallace ordered a milkshake at Jack Rabbit Slims that cost $5 prompting Vincent Vega to ask, in surprise, “Did you just order a five dollar shake” .  After tasting the shake he comments “I don’t know if its worth $5, but is pretty (expletive deleted) good”.

Of course this is an example using a small amount of money, but when you have compounded returns over many years on large amounts of money, it becomes really significant.   Take a look at the table below.  Each person invests $5,000 per year for different time frames.  The blue line is the person that invests $5,000 a year for their entire 40 year career.  His total investment would be $200,000.  Assuming a rate of return of 7%(no guarantee on that, but just for illustrative purposes) his investment will be worth $1,142,811 dollars at the end of 40 years.  That’s 228,562 five dollar shakes!!!!!

The link  below will take you to a site where you can put in your own values with regard to age, rate of return, time horizon, etc….try it out.  It is a helpful way to see where you are financially and what you have to do to reach your goals.

I know that we tend not to think about these things until we have big expenses staring us in the face.  It is important to start early and stay consistent, making the investments like a habit or having automatice investments set up is a way to keep on track.  AND GIVE THIS ADVICE TO YOUR KIDS….START INVESTING WHEN YOU GET OUT OF COLLEGE AND KEEP GOING UNTIL THEY RETIRE – EVEN IF THEY START SMALL, IT GETS THEM IN THE HABIT OF SAVING AND INVESTING.  Chatham Wealth can help with your planning and wealth management needs.  We can also consult your children as well.  Let me know if you would like to come in for a free consultation.