With Rapid and Large Interest Rate Increases, the Federal Reserve has Caught up with Inflation…

In 2022, the Federal Reserve and other central banks raised interest rates rapidly to fight inflation (Chart 1)… 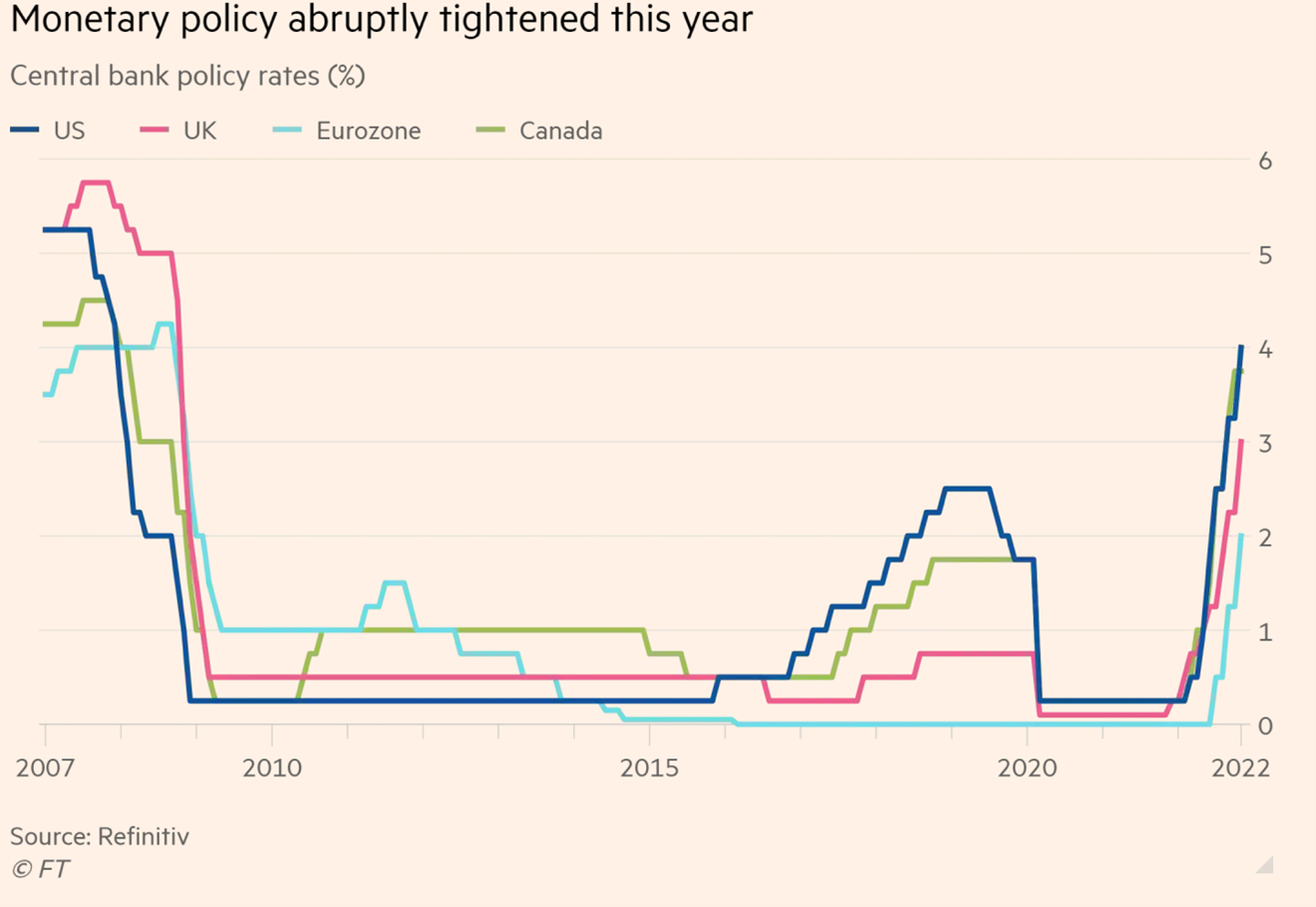 At first, Fed Chairman Powell, was behind the curve on fighting inflation by implementing a shift in policy stance that would let inflation drift above their historic 2% target to allow for higher economic growth and employment.  When inflation did rise above the 2% target, he incorrectly called it “transitory”.  Powell was criticized by many as the most “dovish” Fed Chairman in history.  When inflation spiked to levels not seen in over 40 years he panicked and reversed course and became more and more hawkish at each Federal Reserve meeting.

Powell now has caught up with inflation and perhaps has more than caught up, as the government inflation data lags the current market trends, particularly in shelter (rent and owner’s equivalent rent) are set to fall. 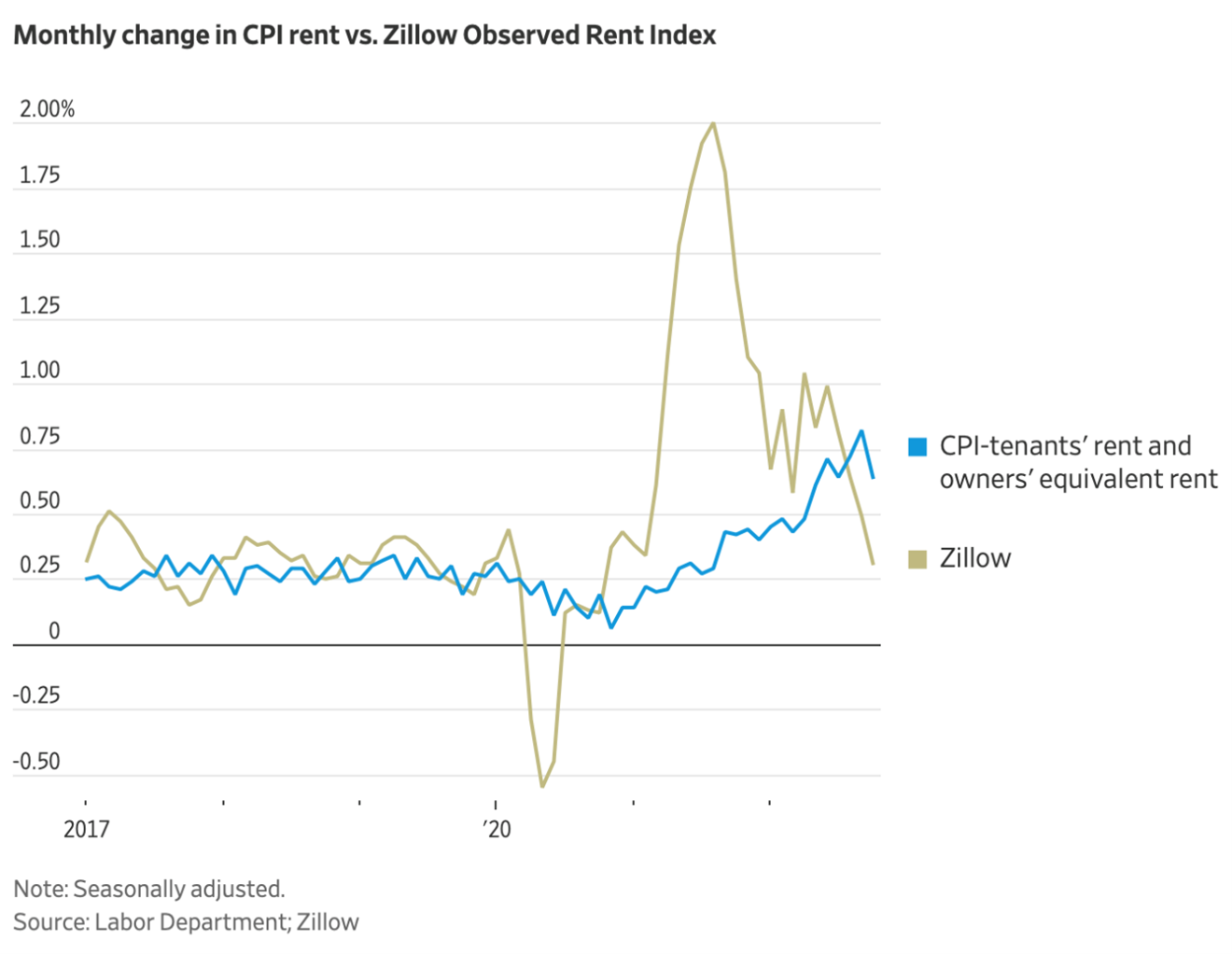 Shelter is the largest component of the Consumer Price Index (CPI) and it is keeping inflation high while all the other components have moderated (Chart 3).  The government’s shelter component is a lagging indicator as new 1 year leases are added while leases signed a year ago are dropped.  The Zillow Index is a leading indicator for shelter, as it is capturing current new 1 year leases in the market place.  You can see that the Zillow Index leads the CPI shelter component directionally (Chart 2). 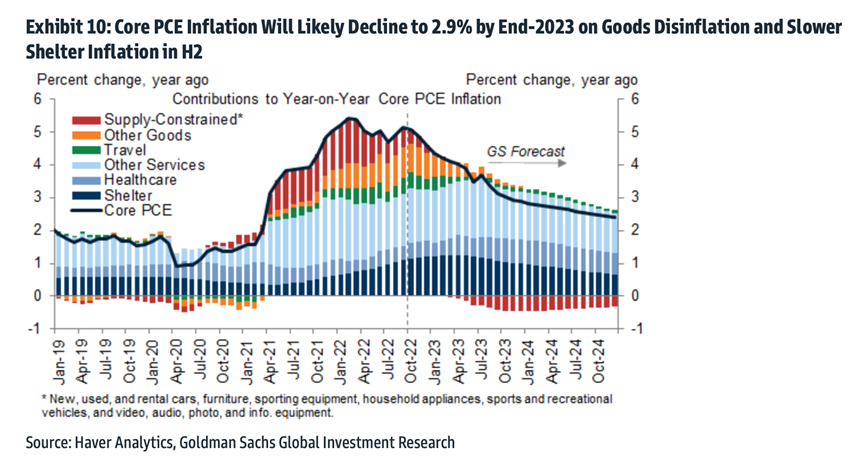 Much has been made by Powell that he is concerned about wage inflation due to the fact that there are 1.7x jobs posted for every one person looking for employment.  Again this is poor data analysis, as these jobs posted are “ghost jobs”.  The jobs don’t really exist and are posted due to the high turnover and no shows (ghosting by “new” employees).  Owners of hotels have told me that when travel reopened due to vaccinations, their efforts to re-hire had poor results.  For every 3 new hires, only one showed up to work and is still employed there, while one new hire stayed less than a week and the other new hire ghosted them and never showed up.  What do you do as a hotel owner?  You have to post 9 jobs if you want to fill 3 positions.  This is what Chart 4 is telling us.  This is the same shortage mentality for retailers that caused them to order much more inventory than sales because only a fraction of the merchandise orders were received due to supply chain issues.  Employers are now slowing down hiring and reducing signing bonuses as they near adequate to full staffing levels, but they are still posting the ghost jobs.  Why? 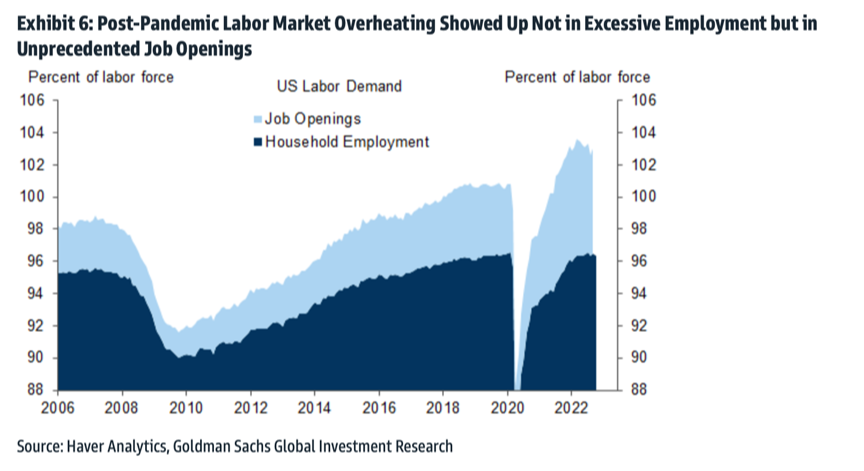 Employers are still posting jobs and interviewing candidates to build up a pipeline for employee turnover and event driven business such as conventions and weddings.  The employers also told me there is a huge shortage of part time workers for these event driven business as part time workers can easily get full time work that comes with benefits such as healthcare, 401k matching and paid vacation time off.

This pipeline of peak period workers and replacement candidates allow employers to keep wages cost from exceeding the temporary spike in inflation caused by reopening of the economy and it is why wage inflation has not taken off (Chart 5). 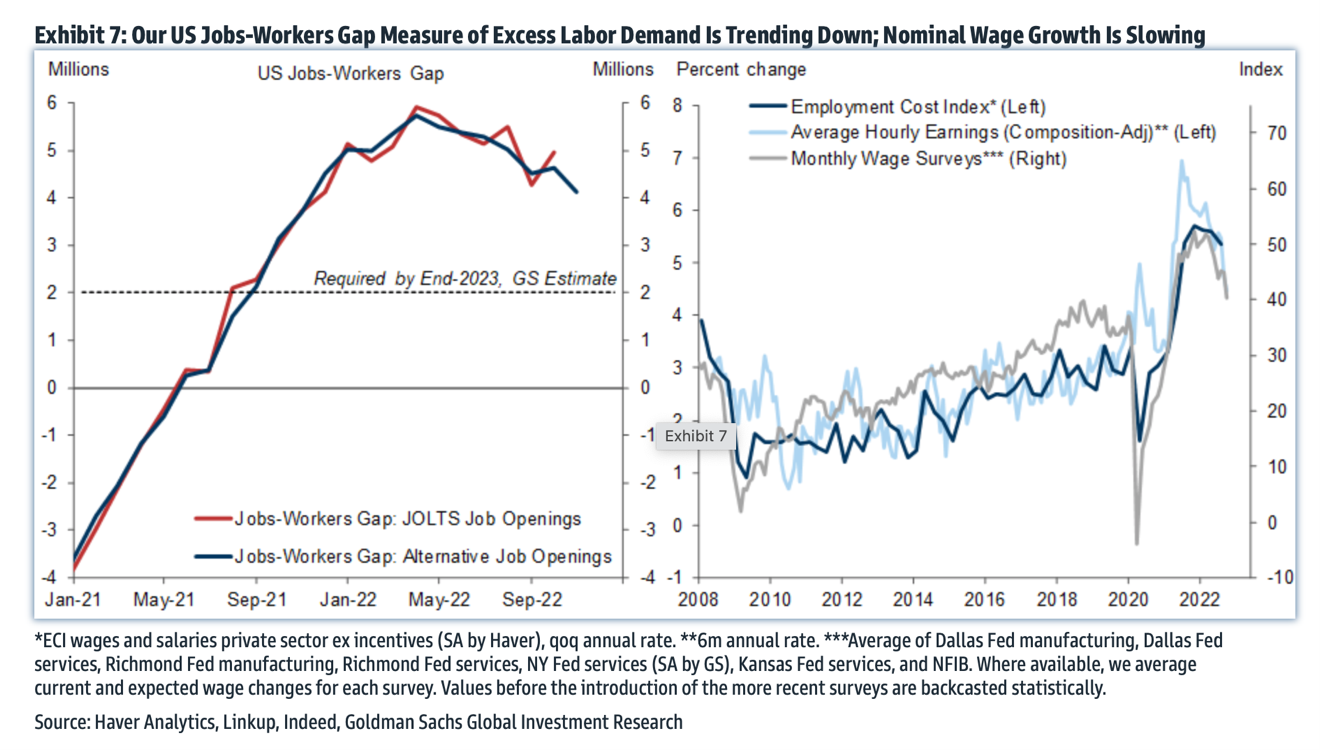 I think Powell gets the above as many have criticized him for using lagging indicators, but since he lost his credibility as an inflation fighter, he doesn’t have the luxury to say “I am going with the leading indicators and so we should pause and then cut rates”.

Powell is building a “bridge” to get to a position to cut.  He is now speaking about how the Fed has done a lot with past rate hikes and he recognizes that there is a time lag when these cumulative increases start to hit the economy.  Powell is setting expectations for moderating future rate hikes and an eventual pause.  He then will wait for the data to allow him to cut, which I think he wants to happen sooner, rather than later.

Unlike Powell, you have the luxury to stay the course and control your finances.  Don’t let the daily noise from the media cause you to capitulate and sell just as we bottom and enter the new up cycle.

Please call us should you have any questions.